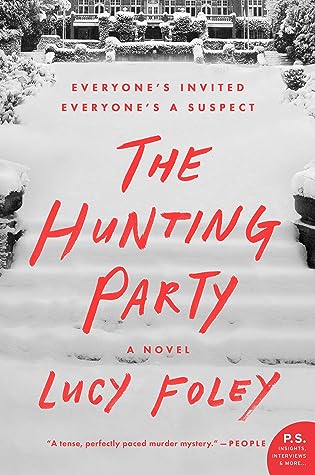 Lucy Foley writes a whodunit with gusto. We follow a group of friends as they travel to a secluded Scottish wilderness for their annual new years gathering. After arriving into the beautiful yet eerie isolation, they rehash old memories and delight in drinking festivities. After their New Year’s celebration, there’s a body. Someone has killed one of their friends and with a snowstorm stopping all ability to travel, it must be one of them.

Foley gives you options abound as you read through narrations of 4 different people (two friends and two hotel workers). You’ll find it difficult to point a finger at any one person as twists and turns are frequent and believable.

There is a lot to love from the creepy atmosphere of being in total isolation during a snowstorm to the idea that the friends have long held secrets they’re keeping from each other. Even with the strong mysterious element of the book, there were some areas of frustration in the writing. My first frustration was the overt and consistent need to tell readers and anyone else in the story how attractive one of the characters are. While she aptly became the mean girl vibe of the book, us knowing she is attractive to literally everyone got old really fast. Next, the author chose not to give any details on any characters until about 75% of the book. So we felt like we had no idea what was causing characters to act or behave a certain way. I believe the author did this on purpose to leave a bit of intrigue about every person in the book but without knowing any one character for 75% of the book, it’s almost going to make a reader DNF. Luckily, the mystery is strong so you won’t put it down for too long but I definitely set it down for longer than I would have liked. In the end, readers may feel like the characters are not acting rationally but then again, it may be that the irrational thought is what creates the drama in the story. I found that I was only fully invested in the last few chapters and didn’t feel completely satisfied with the ending or its explanation. So while I liked this story, I found it hard to completely love it. This book is recommended for readers who enjoy a good whodunit in an isolated, multi-character novel.

*This novel was purchased with my own money for review.