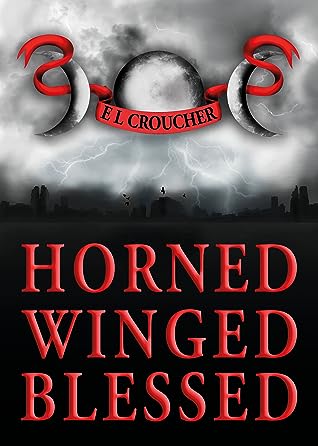 Croucher’s novel enthralls readers with rich landscape and Handmaid’s Tale-esque political ideologies. In this story of LGBTQ+ struggle for equality and male discrimination in a female dominated world, we see Joan, the daughter of the political ‘Silver Party’ leader, embark on a journey wrought with missteps. The Silver Party has come into power after a broken Britain crumbles after World War III.

While Joan is raised to believe Winged (women) are sacred and higher than others, she lives a misguided utopia built around herself. She only peeks from beneath this ruse when she hangs out with friends who are outside her familial circle. Her friends start breaking the glass bubble she has placed herself in while living in a palace with her mother, the founder of the Silver Party.

When her mother tells her she will be the heir to the throne, she is whisked away to a Sisterhood coven to meet the other female leaders across the old UK. At this meeting, she starts to see how the power is truly overtaking the women and after her return, sees how the justice of trials is wholly unjust to those that are not females. Soon, Joan must make a decision to either be like her mother and push the agenda that keeps her in luxury and power. Or band together with a rebel group hellbent on toppling everything her mother has worked for.

Overall, Croucher displays good writing skills throughout the novel and creative twists are abound. Unfortunately, there are some areas of concern in the novel, namely with rampantly cliche insta-love between multiple characters. This took the credibility of the protagonists actions far down for readers as Joan becomes a foaming at the mouth, boy crazed woman after meeting every man in the book. While Joan does have a proper character arc with her finding out she’s been duped and blind, then searching for who she is, and deciding to go with her own thoughts and feelings…it does come across as her lacking depth in relationships with her supporting cast. I didn’t find her friendships to be deep or strong enough to be believable, which hurt the twists from making the intended impacts. Additionally, many times in the story, Joan does not follow through with her thoughts and actions without much explanation other than someone told her not to. That was incredibly frustrating when I wanted to learn more about characters that could tell her more about herself. So that was a missed opportunity on the author’s behalf to give depth to the main character and emotional appeal to the story overall.

In the end, Horned Winged Blessed is a fast paced YA novel recommended for readers of Atwood.

*Special thanks to the author for sending a copy for review.