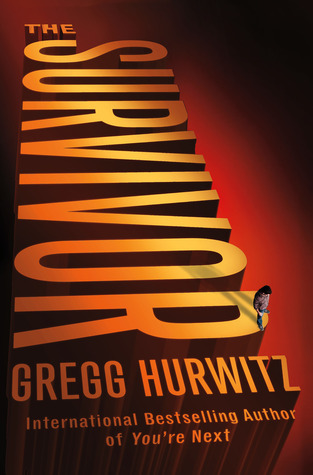 I enjoyed my first Gregg Hurwitz novel with its high octane action and suspense. Here is the synopsis via Goodreads:

One morning in Los Angeles, Nate Overbay—a divorced former soldier suffering from PTSD and slowly dying from ALS — goes to an eleventh-floor bank, climbs out of the bathroom window onto the ledge, and gets ready to end it all. But as he’s steeling himself, a crew of robbers bursts into the bank and begins to viciously shoot employees and customers. With nothing to lose, Nate confronts the robbers, taking them out one-by-one. The last man standing leaves Nate with a cryptic warning.

Nate soon learns what that message meant. He is kidnapped by Pavlo, a savage Russian mobster and mastermind of the failed heist. Unable to break back into the bank to get the critical item inside, Pavlo gives Nate an ultimatum—break in and get what he needs or watch Pavlo slowly kill the one thing Nate loves most—his ex-wife Janie and his teenaged daughter Cielle—both lost when he came back from Iraq broken and confused. Now he’s got one last chance to protect the people he loves, even if it’s the last thing he is able to do.

Nate Overbay is a likable character with a lot of odds against him. He is suffering from PTSD after seeing his bestfriend killed in action and has a disease that will slowly diminish his muscles and make him dependent upon those around him…which is no one. He lost his family after struggling with PTSD, his daughter hates him for being gone for most of her life and now they’ve all been brought into the same dangerous situation. Nate loves his family and finds a way to give Pavlov, a Ukranian mobster (not Russian…they’re different. #pun) the fight of his life.

Readers will fall in love with Nate and feel torn by his situation. Some of the dismal situation is his own doing while others were not, like his disease. Readers will sympathize with Nate but also identify that he was not the perfect father or husband either but is trying to make amends. I enjoyed the action and suspense on how Nate and his family would escape their fate with a ruthless mobster on their tail. The audiobook was well done, although there were some over the top wording choices sometimes. The narrator did a great job with accents and with keeping the pace moving appropriately. Great book for a long ride. Recommended for readers who like action fueled by family drama by a hero that isn’t quite a hero.