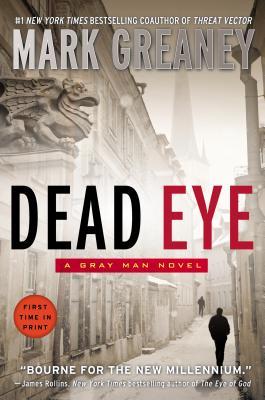 If you know anything about me then you know I am a HUGE Mark Greaney fan. He created The Grey Man character and still gives me a run for my money EVERY book with this character. I’m on book 5 in the series, Dead Eye, and it is another dousey!

If you enjoy action, federal government dirt and grime, spies and espionage…well, then you should get started on Book 1 immediately from Mark Greaney so you can catch up. I will definitely be listening to the next book in the series, Back Blast, this weekend. I likely won’t finish it on my road trip because its like 18 hours but I will have a great road trip making my way through another Grey Man episode. So here’s the quick and dirty on the book Dead Eye without giving too much away:

Ex-CIA assassin, Court Gentry (aka Grey Man) is fleeing his KOS (Kill on Sight) order from the USA and his search-and-kill order from about half dozen mob bosses, international communities and high skill bounty hunters (aka assassins). He has a kill on his mind from a mission gone terribly wrong and he will stop at nothing to achieve his goal. As single-minded as he is, he finds himself face to face with new technology that he’s unaware of since being dark from the CIA. This tech makes him locate-able and therefore, he’s at the wrong end of a gun barrel being held by some pretty nasty dudes. Lucky for him, another assassin wants him alive…for the time being. The Grey Man will have to learn who to trust and what the plan is of Dead Eye before its too late.

*Audiobook purchased with my own money via #audible