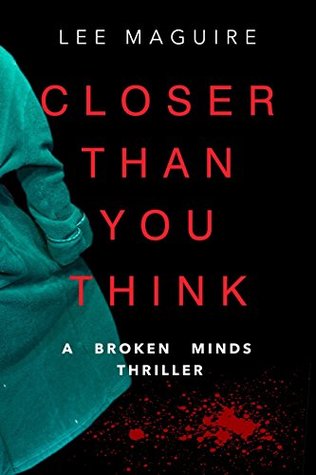 Maguire writes a psychology-laden mystery that lands the reader in the midst of a stalkers obsession of Dr. Bryce Davison, a well regarded psychologist. Bryce is going through many trials in his personal life as he is separated from his wife, battling his own emotional issues tied to his childhood and then his workplace, a rehabilitation ward for children with psychiatric need, takes in a new female ward that shakes things up entirely. On the outskirts of this, Bryce has developed a stalker that has found their way into all facets of his personal and professional life.

The story moves at a steady pace and the mystery grows until the very end. The twist at the end was not as satisfying as I would have hoped nor did it explain the severity of the actions or the “how” some things were done. So while the book had a great flow, the payoff was a tad lackluster for true mystery lovers. The characterization was done pretty well with readers probably liking the main character, Bryce but also being annoyed by his aloofness and lack of bravery one minute then heroic efforts the next. He seemed like two people in one body which was explained by his different demeanor while on the job versus in his personal life. I think this was an error on the authors behalf as readers value consistency then a change later after they’ve learned through action or experience, a real reason to change.

The secondary characters were done very well…well, some of them. I found the ominous writing to be a definite plus to some characters while also rolling my eyes with others (Mr. Stud being the worst and Vicki being massively underdeveloped to have such a prominent role in the main characters life). The dialogue could use some help in that many people spoke like they wanted to have the “best” line in the conversation rather than taking note of how people really interact and what they would harp on in real life. (If there was something I wanted to know, I wouldn’t say to another person, let’s talk about that later and just sit and have coffee.) I’d need some urgent reason why I couldn’t talk about it or some emotional tie as to why the timing was bad. So I found that to be an area that stood out in the dialogue.

In the end, I found the read to be enjoyable and interesting even with minimal flaws. I enjoyed Max and the attention paid to her as well as the interesting psychology shared throughout the story which didn’t seem to overtake the plot. While the book didn’t seem very well planned out, the plot still stands on its own as wholly enjoyable.

Sound like your type of book? Here is the link to the book:

Chat with the author at:

Special thanks to TCK Publishing for sending a copy for review. Check out other books in their house: