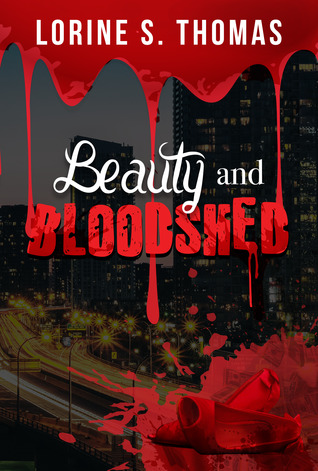 Lorine Thomas’ sophomore novel, Beauty and Bloodshed, continues the theme of a serial murderer loose in the city from the prior novel, Cross Your Heart. In this fast paced novel, Detectives Hall and Jacobs work a serial case involving prostitutes who have been raped, strangled and left for dead. The story moves at a lightening pace as the readers follow through the clues along with the detectives and the medical examiner. I find these types of stories to be highly enjoyable since the narrator does not elude to knowing more than the reader. As readers, we figure out the case along with the characters. Thomas does this perfectly with minimal foreshadowing and allows the reader to experience the ups and downs of dead end clues or missed opportunities.

The characters are written well, with some backstories being more interesting or apparent than others. The medical examiner for instance had a chapter on her backstory which made readers identify with her more as well as the ME assistant, Brie. While this gave an unbalanced approach to the perceived main character, Detective Hall (and the antagonist who had very little to no backstory) it still wet the appetite for those who like to feel they know the characters to align their actions. While I wished for more depth in the characterization of Det. Hall and the antagonist “Tom”, I felt the book moved fast enough using clues that it was hardly missed.

The story line itself is interesting even when clues are missed by the detectives (I found this to be quite realistic in nature). This book is recommended for readers who like fast paced murder mysteries with a police procedural aim.