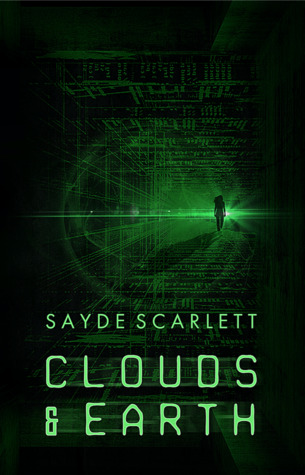 Sayde Scarlett’s debut novel is one that will leave readers feeling stumped. The storyline follows Sandy Attiyeh, a war hero, who is bored with her life so she befriends a powerful CEO and helps him build an illegal civilian tracking system and Massi, an Academy cadet, trying to pass the Academy to become an Intelligence Community (IC) agent. The story is very disjointed and the plot weak for readers used to more depth in their characters, locations and story building. I didn’t find any character that was especially likable or one that I could cling to or understand deeper in the story. I also questioned why we were following Massi at all since his storyline did nothing to support the main story line of Sandy working for Lyndon. So I thought that was a weird choice by the author that could have been avoided entirely and given more time to build on the the current state of the world or atmosphere. There is much talk about the Long War but no real time put into explaining how it came to be and what it was like for those remaining at home or even why it was important. I wanted more backstory, more atmosphere (you hear of autocabs but don’t see any other modern elements of the world) and I would have chosen to follow Drummond (for the political angle or possibly Muro). The only thing readers will get is a very unusual assassination scenario that seemed far too easy to save an entire nation.

I also thought there were some overly dramatic scenes (people bursting into tears when a simple tear will do or someone crying on the floor like a temper tantrum just to compose themselves minutes after being dragged from a car by another adult). The relationships were also very odd between the characters, Sandy is giving bad advice and taking/offering drugs to youth, doing things because she is “bored” and no one questions this response deeper? They ask why she helped someone make something illegal, I’m bored is her answer and no one digs deeper! This was a source of great frustration for me while reading. The plausibility and the reactions of characters were a bit off.

The relationship between Massi and Natalia was strange as all hell and highly unnecessary as well. We gained nothing from either character through their relationship other than Massi pining for a girl that will go on record to lie on him for sexual assault (and she goes unpunished for this). As well as everyone having skills that are not explained how they got them at all. Sandy was a war hero and her flash backs all pertain to her fighting skills, then she is all of a sudden a secret tech genius that somehow never came out in all her training and years but is to the point of being able to hack anything. Same with Natalia, she’s supposed to be a tech wiz but no backstory as to how that happened other than, “she probably taught herself. She’s smart”? (face palm). While I was really looking forward to the female war hero and tech genius this book fell a bit flat for me in plot and character development.

*Special thanks to Xlibris and JKS Communication for sending a copy for an honest review.