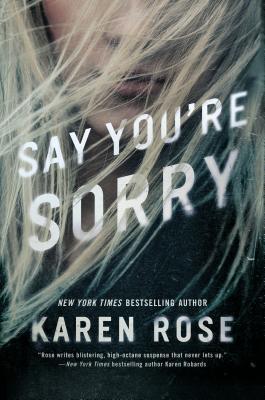 Karen Rose is a new author I’ve recently experienced in her latest novel, Say You’re Sorry, which is a romantic suspense formulated around a murder mystery. There were many bright spots in this novel and the twists and turns, while sometimes obvious, will be satisfactory outcomes for readers. The story follows Daisy, a recovering alcoholic and radio personality, as she is attacked by a serial killer. Her childhood prepared her for the attack and surprised the attacker enough for her to grab some evidence while fleeing. This evidence is the catalyst for the rest of the story. Daisy meets Agent Reynolds and finds an instant connection. The serial killer, now having being thwarted for the first time becomes obsessed with Daisy and in this obsession gets closer than anyone ever expected he would to her, her family and her friends. The antagonist has his own brutal backstory (cue the child abuse) which doesn’t serve as a reason for readers to sympathize but only forces the reader to understand his many layers and obsessions.

There are three storylines raging throughout the novel…Daisy and Agent Reynold’s relationship building, the antagonist’s backstory and continuous killing as he searches for Daisy and the cult (you’ll have to read it to understand why this becomes a storyline). So there is never anything lacking as far as a change of pace. You’ll be entwined with one of the three pretty heavily without breaks. Since I am not much for romance writing, the storyline with Daisy and Reynold’s relationship was a little tedious for me but I am sure those who like romance novels will enjoy the unique relationship, the dialogue and the build up of tension. There were also points in the novel that I felt were redundant. Many times the reader would follow a character and know what is going on, just to have the characters have a conversation about it chapters later and repeat everything we already knew. So that was very tedious to read over and over from different perspectives. Without the redundancy the 600+ novel would likely be 400 pages and a much quicker read. All in all, Rose has a very good writing style that allows her to incorporate multiple storylines seamlessly and create an air of urgency and tension. I found the last quarter of the novel to be most enjoyable and face paced. Recommended for readers that like romance with a thriller twist.

*Special thanks to Berkley Books/Penguin Random House for an ARC to review.