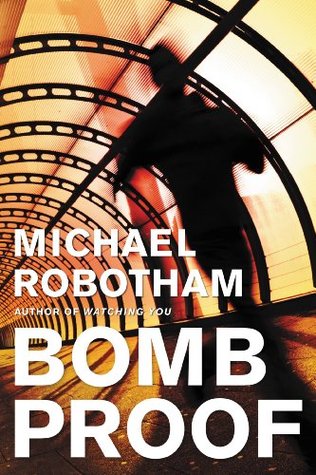 Robotham writes a fast paced story about Sami Macbeth and his series of misfortunes. He is likely the most unlucky guy ever. Here’s the Goodreads synopsis:

SAMI MACBETH IS NOT A MASTER CRIMINAL. HE’S NOT EVEN A MINOR ONE…

He’s not a jewel thief. He’s not a safe- cracker. He’s not an expert in explosives. Sami plays guitar and wants to be a rock god but keeps getting side-tracked by unforeseen circumstances.

Fifty-four hours ago Sami was released from prison. Thirty-sex hours ago he slept with the woman of his dreams at the Savoy. An hour ago his train blew up. Now he’s carrying a rucksack through London’s West End and has turned himself into the most wanted terrorist in the country.
****
Sami has a way of falling into a bad situation on accident but then by his own power, makes it infinitely worse. This is partially what I did not like about the story. It was so jam packed with bad decisions, you start wondering why we are even following this main character because he’s not reacting with much logic. Overall, I liked Sami in the beginning and felt like the story had some twists and turns I didn’t see coming. I didn’t care for the sister in the novel since she was used as a catalyst for Sami to do stupid things but I know the writer needed it to move the story to outrageous heights. Overall, I thought the story was okay and I couldn’t really suspend my logic for such a lengthy period of time. The high note was the pop culture references and humor. Recommended for readers who don’t mind an outlandish story and a bit of humor. The narrator reads pretty fast paced which was hard for me to get used to in the beginning with his accent. I was able to get used to it fairly soon even though I felt I missed some things (lol) but he does great with the voices and dialogue to help bring you into the character’s moods. There was a moment in the book that I wondered if a portion of a prior chapter was just copied and pasted. I had to look at my chapter setting to make sure I didn’t accidentally rewind the audiobook…I had not. But it sounded so similar, I was caught off guard and pulled out the story due to the redundancy. Not sure if anyone else will notice it but I did. Decent audiobook but not one I would listen to again for fun.