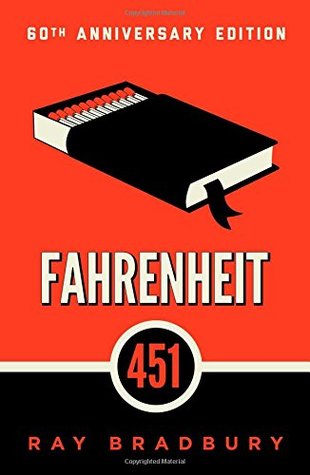 I know people will look at this rating and wonder what the heck is wrong with me…but I really did not like this book! It was ALL over the place and the writing style was strange and disjointed in my opinion. Maybe I’ve grown used to a certain amount of description and not outlandish emotions. Anyway, this well read “classic” was so close to a DNF but because it was so short, I finished it.

The story follows Guy Montag in the near future (now). The book was written originally in 1951. So many people who read it are enamored with Bradbury’s ability to “see” the real future with flat screen televisions, earbud phones and other tech that we so easily use today. Once that initial awe wears off, you’re left with a story of Montag who is a fireman that burns books and houses instead of saving them from fire. His job requires him to extinguish books of all sorts, even the Bible and the Constitution and the Magna Carta. The world exists for fun alone and if it makes you sad, its banned and a threat to all. Montag meets a strange girl one day on a walk home from work and her perspective on life shifts something inside him. He starts seeing things differently. He sees his home life in shambles, his unloving drone of a wife, no children, the endless suck of his days without real happiness. The story is his plight to finding himself and the courage to want authentic happiness.

In the end, the story is a great idea but the execution was flawed and scattered. Glad I read it so I can say I did and to engage with others who have also read it but I didn’t gain nearly as much as I thought I would.