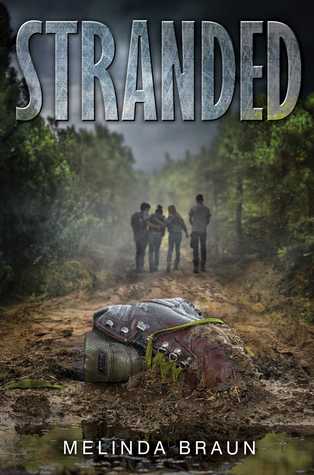 Braun writes a very fast paced novel of young adults stranded in the wilderness fighting to save their own lives. Unfortunately, the story is larger than life in many areas and quite unbelievable for readers who have read very good, realistic “stranded” stories. Also, the character development was not strong enough to make this very memorable. So I’ll walk through those points…

Cons – (some spoilers here)
The character development left a lot to be desired. Although Emma had a backstory, no one else did and hers wasn’t strong enough to carry the story. I suppose the author was trying to show through her dreams or premonitions that she was evolving in the wilderness but it came across as totally spaced out confusion. It only works if the character figures it out as well as the reader. We figured out what was happening but Emma seemed to still feel as though everything was her fault until the last pages and she still didn’t fully identify with it. We had a little hint of Isaac’s backstory but we had that overtaken by his sour, demeaning attitude so in the end, we just didn’t care if he was hurt. Chloe and Oscar unfortunately were place holders for barriers and forced love. Chloe hurts herself early on which of course is the barrier for the group to do things they wouldn’t naturally do and make it a harder, slower journey. Oscar is the love interest and that’s where his backstory stops. Wish there was more on him so I could actually care about any love interests. The dialogue was not memorable nor did it open us up to any character backstories. All the characters ended the book knowing absolutely nothing about each other. What happened to the bonding through survival?

Now to the big whoppers…the weather changing so drastically (hard to believe), a winter storm coming but its warm days earlier (hard to believe), a moose being chased by wolves for days (hard to believe), falling down a ravine and holding a person with one hand for a very long time (hard to believe), Isaac’s constant sexual actions and innuendos not being stood up to by anyone (uh…), Isaac being quickly forgiven and not even confronted entirely about abandoning a person in the woods and his racist comments (hard to believe), no one using the items in their bags appropriately (uhhh…). So there’s lots of things as a reader where you’ll stop and go “why don’t they use the mirror? What happened to the flashlight? Why did someone use all lighter fluid and matches in one day and no one said anything?”.

While the story was fast, it was hard to suspend my belief constantly.