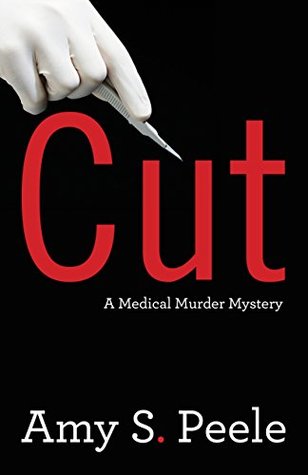 Peele’s novel, Cut, gives the reader a dose of mystery hidden behind the main scene of a great friendship. Sarah Golden is a well sought after transplant nurse that discovers a fraudulent and potentially deadly plot of a high powered couple “buying” their way higher on the transplant list. When bodies and bruises add up, Sarah teams up with her comedic friend, Jackie Larsen, a stay-at-home mom yet former nurse. They find ways to dig deeper into what’s going on with the rich and powerful being able to circumvent the waiting list. They must be careful because when the rich want a problem to go away, there’s no extent they won’t go to hide their transgressions.

Peele does a great job of building the relationship between Sarah and Jackie. They have funny and comfortable conversations about the case, their relationship, men and a host of other topics that really shows the reader there is a strong bond between the two characters. Jackie was a star in this story and probably the only character I truly liked. Her personality shines in the dialogue and her willingness to help her friend and a good cause. Sarah came across as strong but overshadowed by her friend, Jackie, on many occasions in the story. Her back story wasn’t strong enough to carry the story. So the book turns from Sarah being the main character to the reader feeling as though Jackie is the main character. This isn’t a bad thing, of course, since Jackie is more likable and memorable because of her family, her nursing background, etc. but it does throw the reader off slightly on whether you should get comfortable with Sarah or care what’s going on with her multiple dating escapades (which many times came off as forced). It’s very clear that the story was written by a nurse because there was an abundance of detail on anything dealing with nursing in the story, not so much medical but how patients are cared for, the questions asked, the camaraderie of the nursing staff etc.

Now to the other characters. You meet, Sergio, and you will know pretty quickly that he is handsome since everywhere he goes in the story, it is mentioned and women are throwing themselves at him constantly. He has a sour attitude along with his mate, Amanda. Sergio and Amanda are the antagonists in the story and they fulfill their duty well. You will despise them and question them constantly throughout the story.

I enjoyed this story. With a little more descriptive writing to couple with the excellent dialogue the story could be a homerun. I’ll caution readers that this is a very different kind of murder mystery. You will not have a real “murder” scene typically found in a murder mystery. The mystery is based on a hunch by the main character and is built throughout the storyline. So don’t go into this novel with a typical expectation based on the title. This is a character driven mystery, almost cozy in nature.

*This book was sent by the publicist for an honest review.