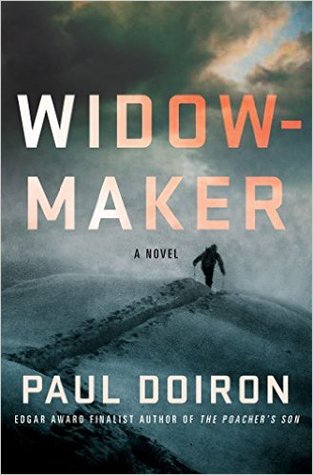 Widowmaker takes the reader on a trek through the snowy, mountainous regions of Maine. A place I know absolutely nothing about with its hunting, skiing and small town secrets. This is my first Doiron book but likely won’t be the last.

The story follows a game warden, Mike Bowditch, on a journey to find a missing man that he’s been manipulated into finding while he’s on off time from his normal duties. Mike is smart and had great attention to detail that keeps the story moving along on pace with clues and questions in various storylines.

First, there’s a storyline of a wolf dog or hybrid wolf that had been discovered and captured. Mike must find a home for the rare creature that had captured his interest with its intelligence. Next, Mike has his demons he’s battling with a dead father that was notorious for being a charismatic yet heinous poacher, womanizer and all around problem. He wants to mourn for his dad but finds it hard when everyone he knows reminds him that he’s born from a man like Jack. Lastly, there’s the mystery of the missing boy and the story behind a big secret the entire town is hiding.

In the story, we meet some colorful characters and are taken down various storylines that make the reader feel like they know this town and its people and have been there. Doiron does a good job creating links to storylines which was helpful because at certain points I wondered why we were going down so many lanes.

All in all, I liked the story but it was slow in certain points so I took a star away. I also took half a star because I didn’t love any one character enough in the story to make this book memorable. So it’s a solid read at a 3.5 star rating.

Purchase this book on Audible or use my Book Depository affiliate link for discounted rates HERE (you get a great rate, free shipping and I get a few cents for sending you there. Woo-hoo!)