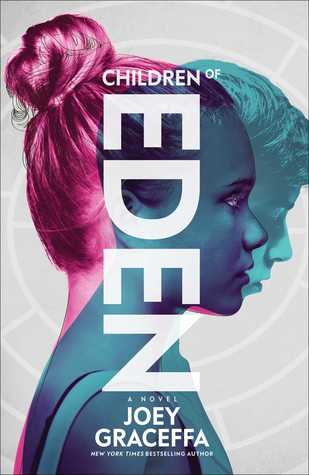 *I  know, I know…I’m not following my reading list BUT I needed a change and this cover is ah-mazing, right?

Joey Graceffa’s debut novel, Children of Eden, is a strong start in the fiction world after his memoir. Even still, there is much room to grow in his writing style and character building. I enjoyed the story of Rowan, a teenage girl, in hiding due to her being a banned “second child” in Eden. The book is based in a technology driven society of the future (don’t think cellphones, think eye implants that scan for train rides and money transactions). Rowan is on the verge of getting her first chance at a life in society with a pair of black market lenses that will allow her to move about the city seamlessly. Unfortunately, the lenses come at a price. She must trade her family for a new one and never see them again. As things unwind, Rowan gets the courage to explore the town outside her home (without her lenses) and meets a cast of characters that help her. Ironically, there’s a rebel group hoping to free all second children and they enlist her help.

Along the journey there are many twists and turns and friendships made. I found the story to lag in the beginning a bit. I didn’t find it incredibly gripping but good enough to keep reading. I think Rowan’s voice (due to it being written in first person) seemed quite childish so it was hard to see her as brave because she doubted herself constantly and had a negative outlook on almost everything at first. Not sure if this was purposefully written to give the character a “spoiled rotten” child vibe which changes to a “oh, the real world is so much harder than I thought” type of outlook. Either way, I didn’t find her very endearing although there were moments by Lark or Lachlan that helped bring some normalcy to the story.

I suspect this book to have a follow-up since there are a rash of unfinished storylines and explanations. For instance, what secret was Lark going to share? What happened to Ash? What is the big plan to take over the government? What was Aaron Al-Baz’s big secret? What happened to Rowan’s father? Did he help in the end? Lastly, what the heck happened in the end??? I was utterly confused about what actually happened.

I think the book was okay. Nothing that I’d remember to tell a friend about. The ending moved fast but left a lot of unanswered questions so the reader doesn’t feel fully satisfied with the ending.