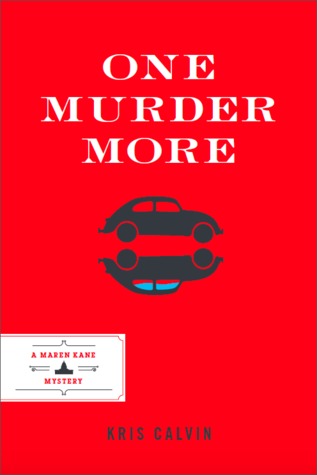 Kris Calvin’s, One Murder More, was a simple and efficient whodunit. There were many things I liked about this new authors style choices and the story line itself. The story begins with lobbyist, Maren Kane saving children from a drowned, wrecked vehicle along with Senator Alec Joben. Shortly after, she finds a good friend dead. Unfortunately, her old friend and mentee, Sean, is immediately nabbed for the unthinkable crime. Maren doesn’t believe the cops have the right guy and thus, works hard to clear Sean’s name (and secure his freedom). Throughout the story, you get a good grasp on who Maren is and the author does a great job in bringing her personality full circle through the men she dates…or doesn’t date. Also, you get a full glimpse into her life as a lobbyist as she uncovers legal issues with a bill she is trying to pass. A bill that has a lot of blood on it. In her search for the killer, Maren finds out more than she bargains for.

I enjoyed Calvin’s characterization of Maren and her relationships. Unfortunately, her character was a bit confusing at times because she was extremely undecisive or shy while in others bold and heroic. Maybe that was the character arc at work? I thought Alec and her relationship was forced and didn’t happen organically. So it was hard to get excited about how they end up. Anyway, the author does a good job of explaining details that matter and keeping the readers in the dark about what actually happens. Many red herrings are thrown in to keep you guessing. I would caution the author to not get caught up in too many minor details (such as using four sentences to explain what a Tesla looks like). Overall, I rate the book a 3.5 because of the heavy legal and political aspects that I didn’t find super interesting as well as the character not being someone I’d remember after a few books. When there were slow moments, they were incredibly slow. The mystery was good and I couldn’t figure it out, so for that, I tipped it closer to a four star. This book is for readers who enjoy a good political mystery with a main character that takes you through it at a steady pace but doesn’t quite win you over.

*This book was given to me by the publisher at BookCon2016 for an honest review.