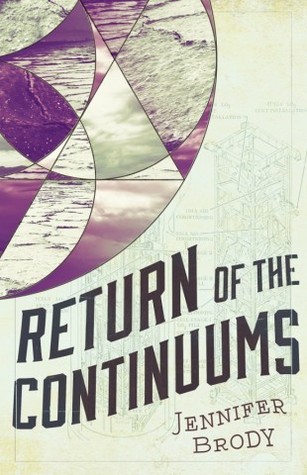 Brody does it again in the second book in The Continuum Trilogy. Myra, Aero and Seeker rendezvous in deserts, mountains and the deep underground cavernous city of The Darkness of the Below. In the beginning of the book, all the main characters are separated and slowly making their way to each other. I enjoyed the thought process that Brody must have gone through in order to weave so many different storylines and locations together. There were some areas in the book that lend itself to “larger than life” ideals. The lightening scene was one such occasion. I found myself rolling my eyes and saying, “you couldn’t come up with something better than that?”. In this same way, I felt the first half of the novel lagged tremendously. BUT the second half of the novel redeemed itself in a big way. Once Myra, Aero and Seeker are finally joined together, we see the razzle dazzle of Brody’s writing. The characters are given added dimension in relation to their back story and their new challenges as well as friendships. There were many instances where the twist was expected yet still juicy to read and others where it was a total shock (such as the explanation of how the Doom occurred). Although, at the end of Book 2, you will definitely be waiting on pens and needles for the outcome of the surviving human race in Book 3, there were a couple other questions still lingering in the characters lives as well…who is really in love with who? Will someone sabotage saving the others because of jealousy? Bravo to Brody for entering another novel in the series that is a good foundation for what I hope will be a legendary ending!