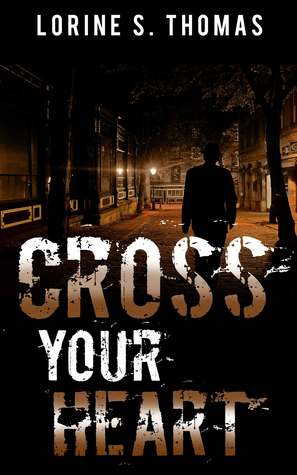 *Author gifted this print book for an honest review.

I enjoyed Lorine S. Thomas’ thriller, Cross Your Heart! I give this thrill ride 3.5 stars because I love the premise and the speed in which events happened in the story. Thomas is a new indie author on the scene and she writes as if she’ll be around a while. In the story, we follow a solid group of friends from college after a heinous prank gone wrong. In this prank, the wrong person is convicted and sentenced to prison. No one from the group of friends attempts to help…and this will be their eventual undoing.

A mad man is killing their friends, one by one and the police can’t find many leads. The story comes to a crescendo quite quickly and doesn’t hold back on the action sequences. The story lost a star because the dialogue is clunky and cliche. The author chose quite often to tell the story through the dialogue instead of use emotion and inference to let the readers know. It just didn’t sound like realistic conversation at many points throughout the story and the decision making of the characters were hard to agree with on a few occasions. Even with the dialogue issues, the story shines when it layers the relationship of Shania and Patrick into the thread of the story. I was captivated by Patrick more than any other character because he had depth (a mistake he regretted and tried to right, bravado in the face of danger and the need to protect those around him), everyone else in the story had less dimension. Even the antagonist was a bit paper thin, only existing based off one wrong that could have been stopped on his own volition.

Overall, I think the story is a good debut worth reading, especially if you like a thrilling twist and turn of a novel.