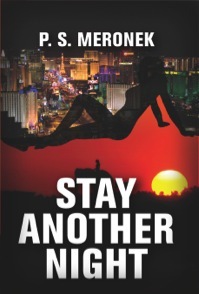 My rating: 4 of 5 Stars
*Received as Goodreads First Read

P.S. Meronek has written a gripping novel that takes you on a journey of Coco Steven’s life filled with the beauty of young love and opportunity. There is a dark mystery to her past, the murder of her father, that haunts her. Even though she’s pushed the past to the back of her memory, you follow the many parts of her life as an under-aged stripper turned runway model then a very successful actress. Coco is bonded to mobster millionaire, Sam and the value of their relationship in this book is a breath of fresh air. It’s complicated and comforting. Coco gets news that shatters her and forces her to change a path in her life and test the depth of her love to Sam. Meronek leaves no stone unturned in this novel and gives a gratifying ending that I smiled openly upon reading.

PROS: I found this novel very witty and funny but there were also some very thought provoking moments throughout the book. This is the kind of book I’d probably want to mark up with a highlighter or sticky notes. There were an abundance of quotes and thoughts that could really open up some valuable discussions. I almost cried over a damn donkey in this book as well! Gosh, I’m a sucker for human/animal love. This book was very character-driven and you feel like you know everything there is to know about a character. I really fell in love with Claire and Jack even though they played small roles in the book. Very well done Meronek!

CONS: I didn’t think the book needed to be as long as it was. The book could be considered over-described in a few areas. Not many overall flaws in my opinion.